The ArtTimeSync packet is used to set the real time clock in network devices.

The ArtTimeSync packet can be broadcast or unicast to the network. The decision on which to use is very much application specific. The most common implementation involves a single controller broadcasting to all other devices.

In some circumstances a controller may wish to programme a single device; in which case the controller will unicast ArtTimeSync. 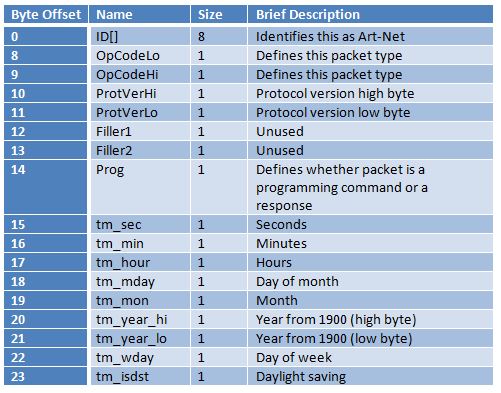 The OpCode field is a 16-bit word transmitted low byte first. The OpCode identifies the packet type. In the ArtTimeSync packet this field is set to ‘OpTimeSync’.

These fields are used to pad the length of this packet to match the ArtPoll header. They are transmitted as zero and never tested by receivers.

The tm_sec field is an 8-bit number that defines the number of seconds encoded in the time. The value ranges from 010 to 5910.

The tm_min field is an 8-bit number that defines the number of minutes encoded in the time. The value ranges from 010 to 5910.

The tm_hour field is an 8-bit number that defines the number of hours encoded in the time. The value ranges from 010 to 2310.

The tm_wday field is an 8-bit number that defines the day of the week in the range 010 to 610. The enumeration is shown in the table below: 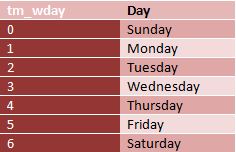 The tm_isdst field is an 8-bit number that defines whether daylight saving is active. The enumeration is shown in the table below: